What is a role?

A role is an identifier for a set of permissions in your application, that can be assigned to a group of users.

The authentication token provided to users when they login to your application will contain all the roles that the users have in your application only, in a special claim named cern_roles for OIDC or CernRolesfor SAML.

The concept of roles was introduced to let applications enforce their own authorization scheme without querying for groups membership.

Since a user can potentially be a member of many groups, if we were putting all groups memberships in a user's token, we would reach a point where the token becomes so big that browsers cannot handle it.

This forced applications to query an external groups data source (generally LDAP) to determine if a user is a member of a group granting certain privileges.

If you define roles for your application, the authentication tokens of the users accessing your application will always contain all the relevant information for your authorization decisions, without being bloated with irrelevant groups memberships.

For example, a users's token could tell your application that that user has the application_administrator role, without containing the irrelevant information that the user is a member of vogons-at-cern group.

How do roles work

As we said, roles can be assigned to groups of users: when a user logs in to your application, their Single Sign-on token will contain all the roles that are mapped to any of the groups they are member of. Alternatively, roles may apply to all authenticated users rather than identifying specific groups; this is useful if, for example, you would like to know whether all users have authenticated with Multi-Factor or not.

Multi-Factor Authentication (MFA) is an identity verification process requiring more than one method of authentication from the user (for example, a password and a one-time code).

The Level of Assurance (LOA) is the degree of confidence in the identity verification process established by the authentication provider issuing the user's credentials.

LOAs in the Authorization Service are expressed with numeric values, where CERN will be the highest, for example:

If you enforce the LOA requirement on a certain role, a user logging in to your application will get a token containing that role only if they are member of a group mapped to the role and they logged in using an account from an identity provider with a sufficiently high LOA.

You can choose to block access to some users at the SSO level by setting up a required role.

If a role is required, users who do not belong to that role will not be able to access your application: after authenticating, they will receive an access denied error from the Single Sign On service.

For example, if you want to limit access to your application only to users above a certain level of assurance, you could setup a required role, tick the option to apply the role to all users, then set a LoA requirement on the role.

When you register your application for SSO, a default role is added to only allow users with a CERN or eduGAIN account to authenticate. You can modify this role if you would also like to allow social accounts (e.g. Google or Facebook) or guest accounts (self-registration, formerly known as Lightweight Accounts).

You can define roles from the application page: 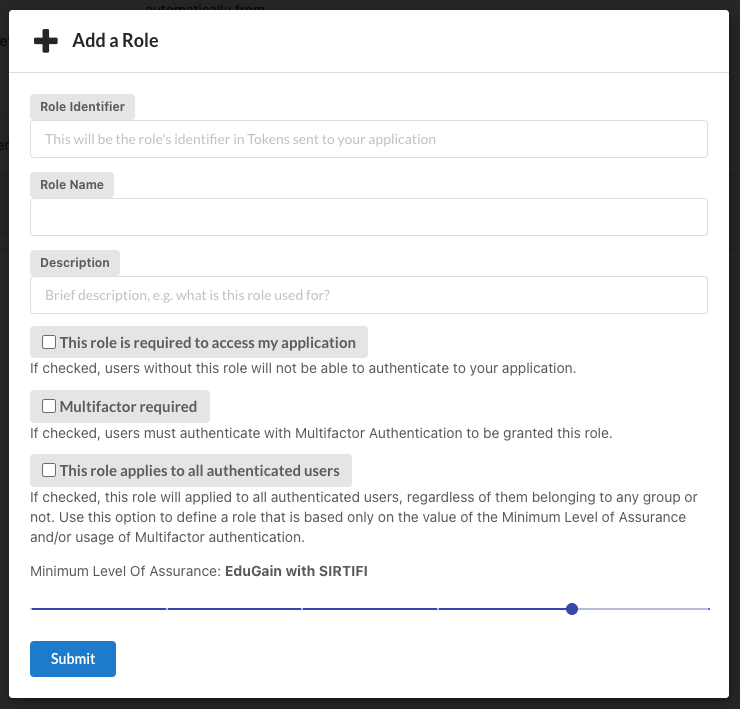 The Role Name is a readable name for your role.

The Unique Identifier is a unique identifier for your role:

The unique identifier of the role is the value that will be passed in the resource_access.{aplication_name}.roles claim of the user token, i.e. the value that your application will need to check to perform authorization decisions.

If you want to restrict access to your application only to users belonging to a certain role, tick the "this role is required" checkbox.

Note: If this box is ticked the application will redirect the user to login with Two-factor authentication by appending only2fa=true to the URL query parameters.

Now that we have defined the roles for our application, we need to map each of them to one or more groups, so that users that are members of those group will obtain the corresponding roles in the SSO token (provided that MFA and LOA requirements for the role are met).

Clicking on the groups administration button next to the role in the roles list will let you define the groups that are mapped to the role.

The roles system is very flexible. A couple of examples are included here to help you get started.

I run a site for the library; only CERN accounts should be able to access and, in addition, I need to identify librarians (in group librarians) so that they can be access the management area.

In this case we need to think a bit harder since users must have ALL required roles in order to authenticate. Consequently the IT staff must also use 2FA if we want to enforce 2FA at the SSO level. You could also choose to make all roles optional and process them within your application.

Anybody should be able to access my site, but they must use second factor authentication

In this case we need to create a required role, that requires Multifactor and applies to all users (i.e. we don't link it to specific groups). 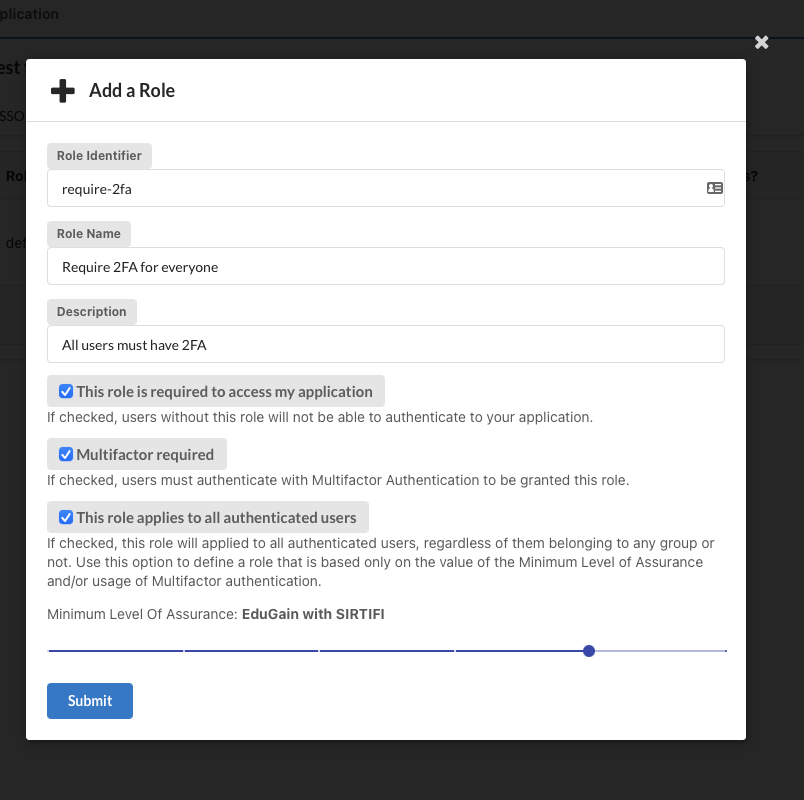